Skip to main content
It looks like you're using Internet Explorer 11 or older. This website works best with modern browsers such as the latest versions of Chrome, Firefox, Safari, and Edge. If you continue with this browser, you may see unexpected results.

Resources from the UVA Music Library 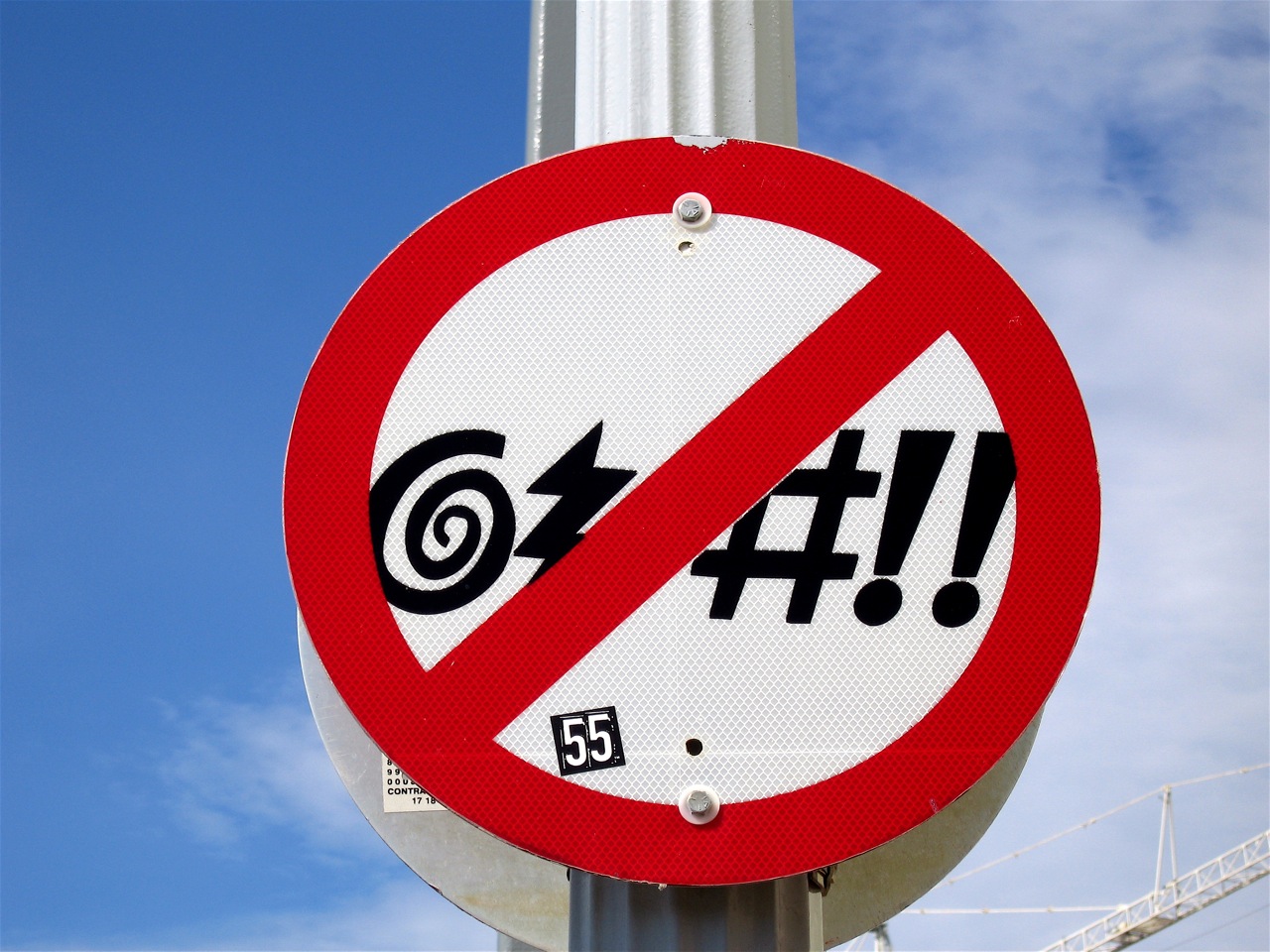 "No Cursing" by Roger Gregory is licensed under CC BY 2.0.

In conjunction with “Banned Books Week,” I have compiled a list of banned sounds since the 1930s. While by no means comprehensive, I hope the examples and sources provided will encourage listeners to consider the complexity of our sonic histories.

From September 17 to November 15, 2011, dozens of individuals took up residence in Zuccotti Park of New York City’s Financial District in an event known as Occupy Wall St. The participants used the occasion to address issues of economic inequality, most famously with the slogan “We are the 99%.” In spite of the large crowd numbers, the organizers were unable to communicate with the participants, since the New York City Police Department (NYPD) had refused to grant permission to use any electronic amplification. The protesters responded by coming up with a system coined the “Human Microphone.”

Sexually suggestive lyrics resulted in the banning of a number of songs in American history. A few notable examples include Dean Martin’s “Wham, Bam, Thank You Ma’am” (1951), Billie Holiday’s “Love for Sale” (1956), Van Morrison’s “Brown Eyed Girl” (1967), Rod Stewart’s “Tonight’s the Night” (1976), and George Michael’s “I Want Your Sex” (1987). In many instances, local and national radio stations were the forces instituting these bans.

FIFA and the Vuvuzela

There was much coverage of the use of vuvuzelas, an instrument traditionally made from a kudu horn, at the 2010 FIFA World Cup in South Africa.  Spectators filled the stadiums with its sound, much to the annoyance of visitors and viewers at home.  Scientists also made the point that the sound of a vuvuzela could damage hearing, and assumed even further damage when used en masse.  In response, the FIFA organization came up with new rules banning “any musical instruments regardless of the size, including vuvuzelas” for the 2014 FIFA games in Brazil.

In times of war, the BBC has found that certain songs are “inappropriate” for airing.  For example, Gang of Four’s “I Love a Man in Uniform” was banned during the Falklands War, and Blondie’s “Atomic” was one of 67 songs removed from the airwaves during the First Gulf War.

Fantastic Voyage has also released two volumes of songs banned by the BBC during the last century, titled This Record Is Not to Be Broadcast.

On February 20, 1939, a pro-Nazi rally was held in New York City by the German American Bund. Mayor LaGuardia, no fan of the Bund and afraid of a counter-rally by the Socialist Workers’ Party, allowed the event to take place in Madison Square Garden on the condition that electronic amplification would only occur within the space, an act of “sonic and spatial containment” (“The Bund will have to do its “Bunding” inside.” -Deputy Mayor Newbold Morris). This was counter to common practice at the time, where most political rallies could be broadcast into the public sphere.

With the rise of the Nazis came the complete control over German culture.  The Reichskulturkammer and Reichsmusikkammer were both created with the express purpose of promoting Nazi ideals and culture, while eliminating more “undesirable” examples such as Jewish and Black music.  Composers such as Gustav Mahler and Arnold Schoenberg were dispensed in favor of Beethoven and Richard Wagner.  Jazz (labeled “Negermusik”) was also a part of this cultural cleansing, and Nazi officials often paired the two together.  Jazz was “resilient” in Germany, however, as evidenced by the so-called “Swingjugend,” young Germans who danced to the banned swing music coming from America.

Following World War II, a number of measures were taken to combat Nazi symbology. Among them was the institution of § 86a in the Strafgesetzbuch, which prohibits the use of Nazi symbols in public. As such, certain songs ("Horst Wessel Lied") and sounds (“Sieg heil!”) are banned, and can incur a prison sentence of up to 3 years.

Throughout the state of Virginia, a number of anti-profanity ordinances have been passed by city councils.  In Virginia Beach, signs can be found along the beach indicating their ban, and the city itself has reported that in 2013 $6,250 in fines were collected from offenders.  Charlottesville also has its own ordinance stating “if any person profanely curses or swears or is drunk in public he shall be deemed guilty of a Class 4 misdemeanor,” or a fine up to $250.  A recent example occurred last semester when UVa student Martese Johnson was arrested by ABC officers for, among other things, swearing in public.

In 1936, an infamous article appeared in Pravda denouncing the then-popular opera by Dmitri Shostakovich, Lady Macbeth of the Mtsensk District. The anonymous author (popularly believed to be Joseph Stalin) called the work “muddle instead of music,” and stated that its borrowing from jazz only served bourgeois audiences; the opera was subsequently shut down. This was only one example of a “Great Terror” that took hold of Soviet culture, and composers such as Shostakovich took great pains to work in tandem with the new “Socialist Realism” used to define Soviet cultural policy.

Following the death of Stalin, a “thaw” occurred where many composers, such as Arvo Part, Sofia Gubaidulina, and Andrey Volkonsky, began writing serialist works to “catch up” with their Western counterparts outside the Soviet Union.

Schmelz, Peter J. “Andrey Volkonsky and the Beginnings of Unofficial Music in the Soviet Union.” Journal of the American Musicological Society 58, no. 1 (2005): 139-207.

Following the terrorist attacks on 9/11, Clear Channel Communications, an organization owning more than 1,000 American radio stations, sent out what became known as the “2001 Clear Channel Memorandum.” In it, the company listed 165 suggestions of songs with “questionable lyrics” that should be avoided after the terrorist attacks. While they were just suggestions, the memorandum stirred up controversy and confusion, as many thought (and still do) that the organization was effectively banning certain songs.

Starting in June of 2015, a number of teachers wanted to have a specific sound banned from French schools.  “Teeth-sucking” or “Le Tschip” is a commonly used sound in African and Afro-Caribbean cultures to denote displeasure, and the sound is seen as vulgar.  As one instructor stated, the ban was essential to help students “get rid of certain cultural codes that are inappropriate in the school and business world.”

The American songbook has been edited for its racist elements. Eric Nuzum notes that 1954 saw radio stations changing the lyrics to Stephen Foster songs, such as references to “massa” and “darky.” “Old Folks at Home,” another Stephen Foster song, was chosen as Florida’s state song in 1935, but in 1978 it was edited to remove “darkies” from the lyrics. Virginia’s state song, “Carry Me Back to Old Virginny” was similarly edited in 1940 to change “Virginny” to “Virginia.” Virginia’s state song was retired in 1997, and Florida’s was further edited in 2008.

After years of receiving complaints from residents, Chicago conducted a noise survey in 1947. A few more years of debate resulted in the passing of the Chicago Zoning Ordinance of 1957, the world’s first ordinance to specify maximum noise levels. Not everyone was happy with the change, however, as evidenced by the Chicago Tribune:

The proposed regulations are foolish… We can’t expect to roll steel in soundproofed Hollywood sound stages… People live in Chicago because they work in Chicago. This city cannot be converted into a single gigantic park without depriving many of the people who would be happy to live in such surroundings of the opportunity to earn a living.

A number of organizations have recently produced pieces on the “Quiet Zone” in Maryland, Virginia, and West Virginia.  The collective fascination is geared towards the tri-state area’s laws that prohibit the use of wireless technology.  The National Radio Quiet Zone, as it is officially called, houses the National Radio Astronomy Observatory and Sugar Grove U.S. Naval Radio Station, and both require an absence of transmissions in order to conduct research.  As such, the residents of the area have restricted cell and radio service, and those who live fairly close to the two stations cannot use microwaves, WiFi, and other broadcasting mechanisms.

For fifteen years, Tokyo administrators have instituted a ban on sounds in excess of 45 dB in the surrounding suburbs.  The move was meant to curb noise pollution, but more recently there has been a movement to exclude school children from the ban.  As one local resident put it, “To treat children’s voices like the noise from a machine is outrageous.”  Still, there are a number of communities who want the ban to remain in place, as they see excessive noise as an infringement on property rights.

Administrators in Phú Yên, Vietnam started punishing public singing in July of 2015.  The province’s deputy chairman, Trần Quang Nhật, stated that “Many people are belting out all day round, or sing banned songs across Phú Yên, so this must be fixed.”  The ban states that anyone singing between 6AM and 9PM cannot be louder than 70dB, or roughly the sound of a vacuum cleaner.  A district deputy chairman expressed anger over the need for equipment to measure volume, as well as the lack of communicating which songs are banned in the province.

A number of politically motivated songs were banned during apartheid in South Africa. While apartheid officially began in 1948, it was not until the 1960s that the Nationalist government began “routinely monitor[ing] and censor[ing music] as part of the state’s attempt to maintain apartheid hegemony.” Among the songs banned included were Stevie Wonder’s “It’s Wrong” (1985), Johnny Clegg and Savuka’s “Asimbonanga” (1987), and Artists United Against Apartheid’s “I Ain’t Gonna Play Sun City” (1985). In 1989, Brenda Fassie’s “My Black President” was banned from the airwaves, but later she performed it for President Nelson Mandela’s inauguration in 1994.

No Screaming on Screamer!

There is no screaming allowed on the Screamer!, an attraction at Scandia Family Fun Center, a local amusement park in Sacramento, CA.  After receiving a number of complaints from residents, the park operators instituted a shrieking ban three weeks after opening the ride. If anyone violates the rule, they’re kicked off the ride.

When it comes to noise pollution, airports and airplanes have been the subject of a number of noise ordinances. In particular, the noise ordinances in Newport Beach, CA have resulted in John Wayne Airport being named one of the “scariest” airports. Planes have to take-off at full power and make a steep ascent, usually between 21-25 degrees compared to a more traditional 10-15.

Did we miss something?

If you think we have missed something important, please fill out the form below (under "Suggest and addition"). Keep in mind that we are not trying to have a comprehensive list. We seek to include representative examples of recent and historical banned sounds.